Yes this is a positive review. When I saw the trailer, the interviews, and the fans reactions I would never have dreamed this film would be above 1 star. After several recommendations and discussions I was challenged to re-think this action monster. I am glad I did.

In the era of over bloated and over important war films, Rambo runs a brisk 91 minutes and gets things done.

It is strange to say, but if you are going to rent an action movie and are a fan of the genre, Rambo is the right movie to rent or buy. Stallone makes one of the most PC films of the year while thrashing out gallons of blood and guts for the right cause. While Cheadle and Clooney try to turn heads with Darfur Now, Stallone is breaking them to look at Burma, Myanmar. The bloody action film is actually ahead of the US cause of the month and gives you an awful look at some things that are going down there now. No one is saying this film is fact, but they aren't saying it's far from it either.

Rambo doesn't even feel like the other films in the series. It has the feel of a lean action or exploitation film of the '70's with an economical fast pace. If done at a different time I could see this film easily inspiring Tarantino and Rodriquez for future riffs. In fact, the film has almost a Sin-City, or Hulk feel to it in the semi-real life story extremely heightened with a bruised hero that has to face the fact that he is a killing machine...and if you're gonna kill, why not some of those people committing genocide?

*As a side note, it makes me curious as to how Machete, starring Danny Trejo will turn out.

Not that Rambo wants to unleash holy hell. He is begged to help out and refuses several times. What changes his mind? What always does, a beautiful damsel in distress played by Julie Benz. Hey, if a hot blond came up to me in the further reaches of Thailand asking for some help on a suicide mission, chances are I'd do it too.

Rambo possesses the special key in Stallone flicks that work; he is an underdog. He is like the hunchback who just wants to be left alone. And I have to say, with his current physical oddity, that isn't too far off the map here. He looks as muscle heavy as he's ever been, but pushing 63 it looks like it's difficult for him to breathe with all that beef on him. After all his muscle and plastic surgery work, it almost looks like he is wearing a rubber suit. But this works for him in the film. Much like the lovable loser of Rocky & Copland, Rambo knows he's not a charmer, and will never get the girl. One of the films better moments is when the beautiful girl hugs her peacenik boyfriend and Rambo knows that is something that he will never experience. Stallone also pulls off a humorous and strangely gleeful task of making that humanitarian pacifist and utter prick, and the payoff of him doing the most beneficial work of his life when he kills a soldier from the Burmese army against his better judgment.

My only real complaint with this film is that the end sequence death-a-thon gets a little cluttered with the fast paced, gritty editing and shooting style. It's done in that Michael Bay Transformers style where we're so close to the action we don't know what's going on in the story. But does it really matter? Stallone is kicking so much ass I think he breaks a new record.

As the credits roll, I'm reminded this is directed and co-written by Stallone. Remember him? It's a comforting fact that a guy who is mostly known as a punchline in this town who got his name by putting his neck on the line for an indi called Rocky in 1976 still can come through with a solid punch more than 30 years later. Here's hoping he's got one more left in him.

Popular posts from this blog

I take pictures of sunsets. 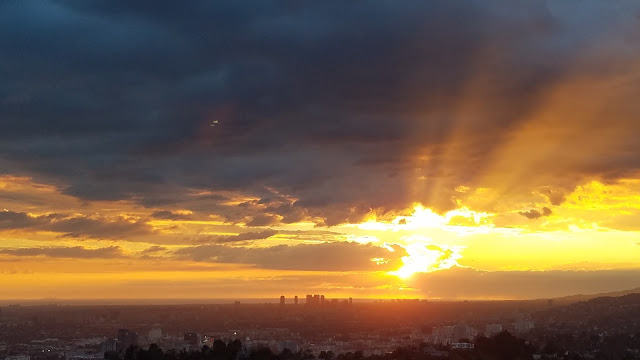 I take a lot of pictures of sunsets actually. I post some on Instagram, but I don't want to bore my audience. So I thought I'd create a blog post for them. And to be honest, there are some pictures before the sun goes down and after. So I deviate from the sunset only premise. Here you go. A lot of sunsets. This series is from my usual perch in Griffith Park, Los Angeles. In the foreground is Century City, All the way on the horizon is the Pacific Ocean. After sunset, city lights brighten the hills and city. Venice Beach, Pacific Ocean You may ask, why do I take SO MANY pictures of sunsets? That is a fair question. My answer is for several reasons. Firstly, just for the beauty of it. I'm amazed how much beauty is around us every day if we just choose to look for it. Growing up in the Twin Cities of MN, my mother would take me on sunset walks down by the Mississippi River to watch the sun set over the river and cit
Read more

Hello. This is a slightly different blog posting for me. Lately I've used this blog as an extension of my video promotion, releasing my videos on another format for additional random e-onlookers. Today I think I'll write about my experience (both internal and external) of a big fat American holiday, the Thanksgiving. The funny thing about blogs and I guess videos on youtube, is that you never know who will view them. True they are public, but the universe is public now. Blogging doesn't seem to be the rage it was a few years ago. Twitter seems to have replaced the blog. People want the micro-blog at 140 characters or less. And to be honest, writing more than 140 characters just seems like a lot of work these days. I guess the thing now is to tweet that you wrote something in your blog... to all of my 139 followers on twitter (both real and cyber-real, that is a promotional add on to companies who auto-follow you whenever you mention a word related to their product.) So und
Read more